The radical idea of handing cash to citizens regardless of whether they work has taken root in Europe. Now America’s tech elite is backing the concept – but why?

Silicon Valley rarely talks politics – except, perhaps, to discuss the quickest ways of disrupting it. On the rare occasions that its leaders do speak out, it is usually to disparage the homeless, celebrate colonialism or complain about the hapless city regulators who are out to strangle the fragile artisans who gave us Uber and Airbnb.

Thus it is puzzling that America’s tech elites have become the world’s loudest proponents of basic income – an old but radical idea that has been embraced, for very different reasons and in very different forms, by both left and right. From Marc Andreessen to Tim O’Reilly, Silicon Valley’s royalty seems intrigued by the prospect of handing out cash to ordinary citizens, regardless of whether they work or not.

Y Combinator, one of Silicon Valley’s premier startup incubators, has announced it wants to provide funding to a group of volunteers and hire a researcher – for five years, no less – to study the issue.

Albert Wenger, a partner in United Square Ventures, a prominent venture capital firm, is so taken with the idea that he is currently at work on a book. So, why all the fuss – and in Silicon Valley, of all places?

First, there is the traditional libertarian argument against the intrusiveness and inefficiency of the welfare state – a problem that basic income, once combined with the full-blown dismantling of public institutions, might solve. Second, the coming age of automation might result in even more people losing their jobs – and the prospect of a guaranteed and unconditional basic income might reduce the odds of another Luddite uprising. Better to have everyone learning how to code, receiving basic income and hoping to meet an honest venture capitalist.

Third, the precarious nature of employment in the gig economy no longer looks as terrifying if you receive basic income of some kind. Driving for Uber, after all, could be just a hobby that occasionally yields some material benefits. Think fishing, but a bit more social. And who doesn’t like fishing?

Basic income, therefore, is often seen as the Trojan horse that would allow tech companies to position themselves as progressive, even caring – the good cop to Wall Street’s bad cop – while eliminating the hurdles that stand in the way of further expansion.

Goodbye to all those cumbersome institutions of the welfare state, employment regulations that guarantee workers’ rights or subversive attempts to question the status quo with regards to the ownership of data or the infrastructure that produces it.

And yet there is something else to Silicon Valley’s advocacy: the sudden realisation that, should it fail to define the horizons of the basic income debate, the public might eventually realise that the main obstacle in the way of this radical idea is none other than Silicon Valley itself.

To understand why, it is best to examine the most theoretically and technologically sophisticated version of the basic income argument.

This is the work of radical Italian economists – Carlo Vercellone, Andrea Fumagalli and Stefano Lucarelli – who for decades have been penning pungent critiques of “cognitive capitalism” – that is, the current stage of capitalism, characterised by the growing importance of cognitive labour and the declining importance of material production.

Unlike other defenders of basic income who argue that it is necessary on moral or social grounds, these economists argue that it makes sound economic sense during our transition to cognitive capitalism. It is a way to avoid structural instability – generated, among other things, by the increasing precariousness of work and growing income polarisation – and to improve the circulation of ideas (as well as their innovative potential) in the economy.

How so? First, it is a way to compensate workers for the work they do while not technically working – which, as we enter cognitive capitalism, often produces far more value than paid work. Think of Uber drivers who are generating useful data, which helps Uber in making resource allocation decisions, in between their trips.

Second, because much of our labour today is collective – do you know by how much your individual search improves Google’s search index? Or how much a line of code you contribute to a free software project enhances the overall product? – it is often impossible to determine the share of individual contribution in the final product. Basic income simply acknowledges that much of modern cognitive labour is social in character.

Finally, it is a way to ensure that some of the productivity gains associated with the introduction of new techniques for rationalising the work process – which used to be passed on to workers through mechanisms such as wage indexing – can still be passed on, even as collective bargaining and other forms of employment rights are weakened. This, in turn, could lead to higher investments and higher profits, creating a virtuous circle.

The cognitive capitalism argument for basic income is more complex than this crude summary, but it requires two further conditions.

First, that the welfare state, in a somewhat reformed form, must survive and flourish – it is a key social institution that, with its generous investments in health and education, gives us the freedom to be creative.

Second, that there must be a fundamental reform of the tax system to fund it – with taxes not just on financial transactions, but also on the use of instruments such as patents, trademarks and, increasingly, various rights claims over data that prevent the optimal utilisation of knowledge.

This more radical interpretation of the basic income agenda suggests that Silicon Valley, far from being its greatest champion, is its main enemy. It actively avoids paying taxes; it keeps finding new ways to estrange data from the users who produce it; it wants to destroy the welfare state, either by eliminating it or by replacing it with its own, highly privatised and highly individualised alternatives (think preventive health-tracking with FitBit versus guaranteed free healthcare).

Besides, it colonises, usurps and commodifies whatever new avenues of genuine social cooperation– the much-maligned sharing economy – are opened up by the latest advances in communication.

In short, you can either have a radical agenda of basic income, where people are free to collaborate as they wish because they no longer have to work, or the kind of platform capitalism that seeks to turn everyone into a precarious entrepreneur. But you can’t have both.

In fact, Silicon Valley can easily make the first step towards the introduction of basic income: why not make us, the users, the owners of our own data? At the very minimum, it could help us to find alternative, non-commercial users of this data. At its most ambitious you can think of a mechanism whereby cities, municipalities and eventually nation states, starved of the data that now accrues almost exclusively to the big tech firms, would compensate citizens for their data with some kind of basic income, that might be either direct (cash) or indirect (free services such as transportation).

This, however, is not going to happen because data is the very asset that makes Silicon Valley impossible to disrupt – and it knows it. What we get instead is Silicon Valley’s loud, but empty, advocacy of an agenda it is aggressively working to suppress.

Somehow our tech elites want us to believe that governments will scrape enough cash together to make it happen. Who will pay for it, though? Clearly, it won’t be the radical moguls of Silicon Valley: they prefer to park their cash offshore.

Evgeny Morozov is the author of The Net Delusion: The Dark Side of Internet Freedom 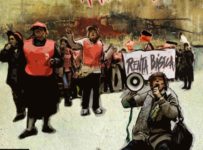 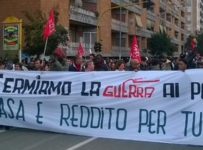 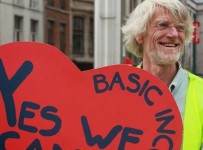