Nobel economist Christopher Pissarides makes the case for new policies to redistribute wealth like a basic income, under condition that it doesn’t take away the incentive to work. “Redistribution is not a dirty word,” he says.

There is no question that old jobs are being automated, says Brynjolfsson. But this should be seen as a good thing, as it replaces routine tasks. Teaching new skills and creating new types of jobs will mean people are doing productive work, which – along with R&D, education and entrepreneurship – is preferable to the introduction of basic income and similar measures.

Dileep George also suggests that, one day, our work and income could become detached from one another. 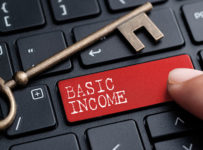