Since the new government led by Movimento 5 Stelle (M5S) and Lega (the Italian extreme right-wing party) was formed, the proposal of a so-called “citizen income” in Italy has had much echo.

First proposals go back to 2013, having been reported at the time.This proposal is among the first programmatic points of the M5S and has been included in the “government contract“, among the goals to be achieved in this legislature. It has reverberated widely, and some confusion has been established. It has been suggested that basic income is in the pipe for Italy’s social policy, an idea inflated by some media reports. To that also contributed the reporting on the Livorno case, a small coastal town in Italy, in which a conditional to work type of basic income experiment has been conducted, having even been listed among the basic income experiments in the world at this time (year 2016).

To be clear, the M5S, even conceding the use of the term “citizen’s income” (a term coined in the 90s, by social movements and precarious workers, signifying “basic income”), is proposing a targeted to the poor minimum income scheme, conditional to work. This kind of policy has already been adopted, for many years, in the majority of European countries. The fact is that Italy is still one of the few European countries which doesn’t have experience with social support for those living below the poverty line. Moreover, European institutions have been asking for the introduction of at least economic support for the poor in Italy, which is one of the countries with the highest poverty rates in Europe.The only social support for the poor up to this moment, in Italy, was introduced by the previous Gentiloni government, which has introduced a “minimum income for inclusion” intended for poor families. This support, however, is very conditional, and includes obligations for the whole family to accept any proposed work and a benefit that averages 130 € per month per person. In addition, only € 1.8 billion have been assigned to fund this social benefit, which covers only a small fraction of the families in need of assistance. The M5S proposal is similar, only the value is increased to around to 780 € per month per person.

The 5 Star Movement has developed, however, the hability to bring forth, in the Italian political debate, a theme that in many other European countries has already been settled with income support for the unemployed or the poor. Social support in the shape of minimum income has suffered funding cuts across Europe, given the austerity measures of the past few years, with the introduction of severe restrictions which reduce accessibility and introduce more work conditions. The Hartz IV reforms in Germany and the Universal Credit in the United Kingdom are examples of this.

Neverthleless, this is the kind of social support the 5 Star Movement is putting forth at the moment, with the “citizen’s income” proposal.

Luigi Di Maio, the current vice-prime minister and minister of labour, is quick to clarify what he means by “citizen’s income”: “those receiving this income will not stay on the couch doing nothing, but will be called on to accept any kind of work, and will be forced to work for the State for at least eight hours per week in the meanwhile”. This adds to a very common mindset of conditional support, based on the belief that people will remain inactive if they are given that chance. A belief grounded on a firm reciprocity work ethic (workfare), particularly remote from the idea of basic income.The proposal, which provides an arguable light condition to work (a possibility to refuse work if it doesn’t align with the minimum income recipient expectations), has never been discussed in Parliament, even though it was brought into parliamentary committees.

The Movement of which Luigi Di Maio is a part of has made a legislative proposal for this conditional minimum income, but the actual parliamentary debate has not yet started. Part of this proposal is the financing of the policy with a quick-start of 2 billion € in two years, to setup a system of employment certers for ensuring that receipients are controlled in their way to find employment. Simultaneously, a proposal of an income Flat Tax of 15% has also been made, which has been associated with tax cuts, given the present day tax landscape in Italy.

However, there have been other proposals already delivered for Parliamentary discussion, such as the popular bill for the introduction of a guaranteed minimum income, presented in 2013. This bill was backed by over 170 associations, after a six-month social campaign, 250 public initiatives and more than 50 000 signatures collected.

There is no doubt that all this political activity has awakened the debate about guaranteed income, or a right to an income, and also about unconditional basic income. In fact, a series of political campaigns have begun in Italy, particularly thanks to movements of precarious workers, who demand a “guaranteed income immediately” and who took the streets with demonstrations in front of the institutional offices. They lined up in front of job centers, asking for a guaranteed income to be given to them “now”.

Citizens movements concerning the right to proper housing and several labour unions, have also demonstrated their request for a guaranteed basic income in several events, while other groups such as the femininst movement “non una di meno” propose ideas such as the self-determination income, which is similar to an unconditional basic income. 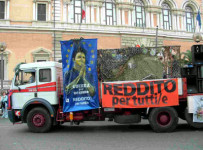 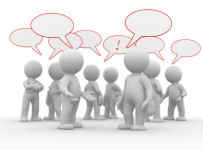 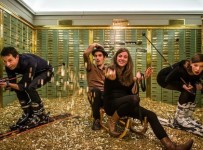